Is canned food OK to eat? 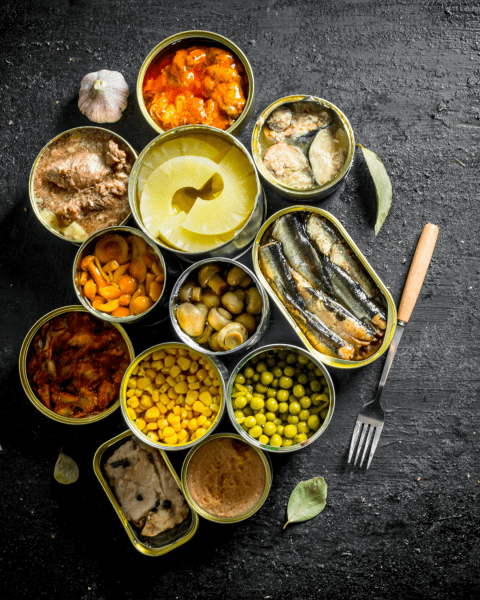 With the cost of living at an all time high, I wanted to bust the myth that canned fruit and vegetables are less nutritious than fresh – in fact, according to the research, putting food into cans can actually maintain those nutrients rather than reduce them.

That said, not all canned foods are created equal! So let’s weigh up the pros and cons. That way, you know what to look out for and can make informed decisions about what’s right for you.

The benefits of canned food

Depending on where you live, access to fresh fruit and vegetables might be limited, so having canned foods is a great practical way to have nutrient-rich foods all year round.

Canned foods can provide nutrient-dense convenience options at a lower price, with a longer shelf life. Take legumes (beans and pulses), for example, buying in cans means there’s no need to soak and cook – but I do always recommend draining and giving them a good rinse. For those with sensitive guts, double rinsing using a strainer can help increase tolerance as I touch on below.

Most canned fruits and vegetables are processed straight after harvesting, when they still have the highest nutrient concentrations. The process of canning can preserve most of the nutrients, so it’s not accurate to say fresh or frozen produce is always more nutritious versus canned.

In fact, one study found those who ate 6+ canned foods a week consumed more nutrient-dense food groups, including fruits, vegetables and protein-rich foods such as legumes. They also had higher intakes of 17 essential nutrients, including potassium, calcium and fibre, which most people don’t get enough of (aka common ‘shortfall nutrients’).

The canning process involves heat and heating can actually increase certain health-promoting compounds. As a result, several vegetables, including canned tomatoes, have been shown to have higher levels of certain compounds (e.g. lycopene) and polyphenols with higher antioxidant activity.

When it comes to the all-important fibre content, while canned fruits and vegetables have a softer texture, generally speaking most of the fibre remains intact.

If you have IBS (irritable bowel syndrome) and have been recommended to try a low-FODMAP diet. Just remember, FODMAPs aren’t inherently ‘bad’ – many are prebiotic (food that feeds your gut microbes), so it’s super important not to cut them out completely! Read more on that here.

Tinned and thoroughly rinsed legumes have fewer FODMAPs compared to legumes that have been boiled from dry. Therefore, small portions (¼ cup per sitting), particularly of tinned chickpeas, butter beans and adzuki beans, can be better tolerated for those with IBS. ½ cup of tinned lentils is considered low-FODMAP.

What to look out for

When the food is heated during the canning process, certain heat-sensitive vitamins (e.g. vitamin C) can be lost (just like they would be with other cooking methods using heat, such as boiling)

BUT this nutrient loss is pretty minimal in the context of your overall diet, so it’s not something to get hung up on – especially if your diet includes plenty of fresh foods too, most of us easily meet our daily vitamin C needs.

So far, the evidence is pretty limited for the canning effects on polyphenols, but initial research suggests the effect on these health-promoting plant chemicals largely depends on the specific product. On one hand, a study on canned peanuts found the polyphenols decreased when stored in brine.

On the other hand, one study found the polyphenol content of canned apricots increased by 48% versus fresh apricots.

Some canned foods may contain added salt, added sugar or other preservatives. While salt (sodium) is important for a whole bunch of processes in the body, most of us already consume too much. And for those with concerns about high blood pressure, high salt intake can be even more problematic.

It’s a good idea to opt for canned foods with no added salt or other unnecessary additives. Some are also canned in brine or syrup, which can increase the added sugar, so look for products canned in water. Simply draining and rinsing can remove much of the excess salt and sugar too.

BPA (Bisphenol A) is a chemical that’s often added to food containers, where it may mix with the food contents. Liquid has been found to be more likely to absorb BPA from its container than solid foods.

Simply put, in test tube studies it’s been shown to have estrogen-like properties, so theoretically could affect our hormones and influence some of our body’s processes, such as cell repair, development and reproduction. Some studies have associated BPA exposure with increased risk of issues such as heart disease, type 2 diabetes and fertility problems.

However, the evidence is a mixed bag, with some studies showing minimal or no effect – so the jury is still out! For now, it could be worth opting for those labelled as ‘BPA free’ where you have the choice, to be on the safe side.

Take-home: Canned fruits, vegetables and legumes can absolutely be a great convenient option as part of your gut-loving diet – they all count towards your weekly plant point goals. Just have a read of the label and try to go for no added salt or sugar options.

Ultimately, it’s all about BALANCE. There’s certainly no need to shun canned foods, especially if it’s the easiest way for you to up your plant diversity. Drain and rinse, and you’re good to go. Just try to think about mixing it up with plenty of fresh and frozen plant goodness too.

4 canned foods in my cupboards