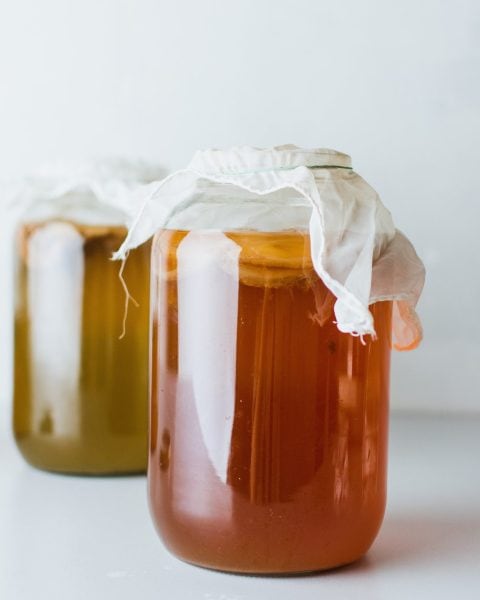 With the kombucha craze coming in hard and fast, is this a legitimate health panacea or yet another fad that flatters to deceive us all?

Oh but first I should probably disclose that although I have a PhD in gut health and work as both a clinician and researcher, I also do like to dabble in the latest food trends so I totally get it! 😉

Now all my cards are on the table, what is kombucha and why are people worshipping it?!

WHAT ACTUALLY IS KOMBUCHA?

Kombucha is a fermented tea, which is simply made by combing tea (often a mix of green and black) with a whole heap of bacteria and yeast. The third and final essential ingredient needed to make kombucha is that dreaded “s” word- sugar!

As you guys are probably aware, the alleged health benefits associated with kombucha are all-encompassing, and range from anti-cancer, anti-inflammatory and even improved libido.

BUT what we need to do is remember that these claims are based on personal observations and testimonials, rather than scientific and research studies. And I hate to be the bearer of bad news, but when it comes to kombucha there have been NO GOOD QUALITY STUDIES (known as randomised controlled trials).

And while harping on about the need for human studies is rather boring, it’s the only way we can fight through all the nonsense we’re constantly bombarded with.

That said, the lack of good quality studies does not mean there are no benefits – it simply means we need to do the studies! (yes I’m working on it!). On that note, kombucha has been consumed for thousands of years and I’m a believer that our ancestors knew what was up…so let’s take a closer look at each of the three ingredients that make up kombucha.

WHAT IS KOMBUCHA MADE FROM?

First the tea. Different companies use different teas but basically the key components include caffeine and catechins (a group of antioxidants). This means that kombucha typically contains some caffeine and antioxidants (although how the fermentation process affects these is not well understood). Also, it’s worth noting that an experimental study (meaning in a test tube not humans) found that the infection fighting properties linked to kombucha were not observed in plain tea, suggesting the health benefits of kombucha are not simply due to the tea.

Onto the bacteria and yeast mix. This is commonly referred to as the SCOBY (which stands Symbiotic Colony of Bacteria and Yeast). Now the crazy thing about this is that each SCOBY contains slightly different types of bacteria (called bacterial strains), and like human’s each bacterial strain should be thought of as an individual in that they possess unique qualities. This is one of the reasons why it’s hard to make generalised statements about the health benefits of kombucha i.e. because different batches contain different bacteria they are likely to have different effects.

And finally the sugar! Yes kombucha contains “added sugar”, which, although generally speaking is considered as “empty calories”, in the case of kombucha it actually serves two vital purposes. First, sucrose, which is the scientific name for table sugar (made up of glucose + fructose) is needed to keep the SCOBY alive. Second, the SCOBY eats the sugar (through a process known as fermentation) which plays a vital role in producing a range of organic acids, B-vitamins, amino acids and many other health-related bio-active compounds. What’s more the fermentation of the sugar releases carbon dioxide, resulting in that delicious kombucha fizz!

Side tangent: Did you know the process of bacterial and yeast fermentation is where carbonated soft drinks originated from? Unfortunately today commercial soft drinks are made by directly adding in carbon dioxide to artificially create the bubbles rather than relying on the traditional fermentation methods.

Back to the sugar…so although a decent about of sugar is added in the making of Kombucha typically there is only a small amount left in the final product (the longer you leave it to ferment the less sugar it will contain…although if you leave it too long it will end up tasting like vinegar- trust me on that one guys!!!).

Nonetheless, when it comes to commercial kombucha the amount of sugar can vary significantly (some companies add extra sugar to appease our sweet tooth). With this in mind it’s always good to check the nutrition label (as a reference point most soft drinks have 11grams/100mls and the World Health Organisation recommends less than 25g across the whole day).

Kombucha isn’t a panacea for health, but then again I’m am yet to be convinced that any single food or drink ever will be. In saying that, kombucha has been used as a medicinal drink for centuries and there is some mechanistic support for how it may benefit health.

So here’s my “food trend” motto: if you enjoy the taste, it’s not doing any harm (physical* or financial) then why not give it a go? I certainly have, check out my mini kombucha fermentary at home

*like with many foods and drinks there are some, although rare, cases of contamination as well as intolerances to kombucha so please use your common sense and drink responsibly.